In my earlier post, I made reference to several recipes, here is one I made this week:

The 1651 Jane Parker manuscript also includes a recipe for hodge podge
"Take the thin part of the brisket of  beefe cut it in square peces the breadth of an hande put it into a pott with water and a good deale of parsley and a litell time, winter savory, a good many of oynions slices, turnips, parsnips, carrots, pared and put in whole, let them a boyling bedtimes in the morning, boyle them till the meate and roots be all to peices, and in the boyling put in a litell peper and salte, then serve it on sippits."

1l 1/4 lb beef
2 handfulls of parsley (removed from woody stems and chopped)
some leaves of savoury and thyme
1/2lb each of turnips (the white ones, not rutabaga), carrots, and parsnip (peeled, I also chopped them a little as they were quite big)
1 1.2lb onions
Season with salt and pepper
Let it boil until everything shreds (apparently still a common practice in England a century later) and serve on sippets

notes:
I used bread slices toasted in butter though just buttered bread is nice too, they should be enough to soak up the juices
I found the parsnip did not break up as much as the other ingredients so every now and then a mouthful would be fairly strong with parsnip flavour, I found it delightful though some would probably wish to use less parsnip so it does not overpower. 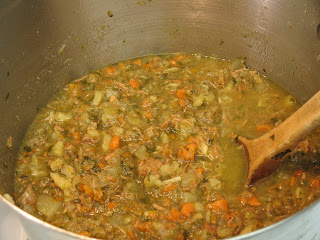