Every now and then I choose a random recipe based on an ingredient I either have or can get quite easily and cheaply. Several weeks ago it was Black Beet Soup from the late 14th century, "Le Menagier de Paris"... it's pretty straight forward and the over all taste is, well... of beet greens. Certainly a feasible way of extending a nice feed of greens since every spoonful was packed with flavour. 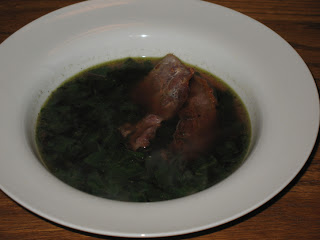 Yes, I know, not overly exciting but it certainly is a nice option for something a little less ordinary (depending on what ordinary is wherever you are)

Not sure what I will try next, I haven't been making as many medieval foods lately and been itching to play with more 18th/early 19th century stuff but may play with a few more dishes before the winter is out.
Perhaps I shall make a dish using beans... will poke into that idea


A recipe was asked for
A translation can be found various places, here is a link to Medieval Cookery (linked to the recipe)
Basically
-portion out 2 slices of bacon for each person (I cut each strip in two when using commercial bacon), drain out some fat but not all, put pan aside with the remainder of the fat.
-Clean, wash and chop your greens before blanching and then frying in bacon fat. Add boiling water directly to the pan (keep this in mind when deciding how much bacon fat you are going to keep in the pan)
-Dish and garnish with bacon
note: you have to really like greens to like this dish, if you would prefer to actually get some bacon taste going on, shredding the bacon would be worth trying
Posted by Unknown at 10:48 PM

Hi, Can you share the recipe please. I would love to try it out. Thanks in advance.