The Many shades of Violet

Last summer I decided that we just needed to have Violet Syrup due to a minor addiction I developed toward violet creams while I was staying in Edinburgh. Sadly, something that seems to be non existent in these parts. 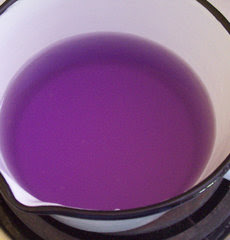 The original recipe came from a book printed around the Elizabethan era, but there are far earlier mentions of violets being used in cookery.

The thing that interested me the most, however, is the chemistry behind the colour and how it reacts to different environments... think of it as a sort of litmus test.
The first picture, shows the violet juice after the petals were soaked in it for a day and then strained. Here it makes quite a strong purple colour... not bad considering the mix of violets from the garden that was used. 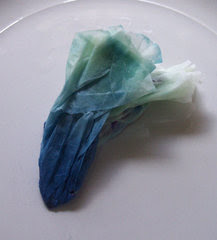 The next picture shows the cloth I used to strain the liquid with, the exact same stuff came out nearly blue which gives promising ideas for blue dyes on the right substance!

The last picture (because I really didn't take that many) show the liquid after making it into syrup shows just what happens when you add a little lemon juice. The amount was not very much but the recipe suggested it so it got added.
I was kind of sad to see just how much it lightened the syrup but it at least made for an interesting show and tell. 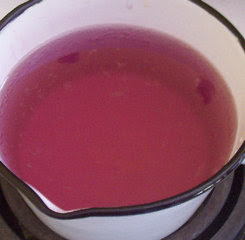 Oh, BTW... when you do go about to make colours, wines, syrups or flavours with your flower petals, do be sure to remove the whites! These would be the little white part at the base of each flower. Many many years ago, during the production of my first batch of dandelion wine, I thought to take a few short cuts and not worry about the few whites that slipped in... oh, but was I ever sorry when their very bitter flavour imparted itself in every nasty slip of that wine. A mistake never repeated!
Posted by AJP at 8:16 AM