as I mentioned earlier, I sometimes like to go the Medieval Cookery site and play a little game, basically grabbing a key ingredient, plugging it in and choosing a random recipe (or carefully choosing one or more)

It's great fun, well for me it is anyway

Last night it was grapes, though I kinda veered off of it a bit and did cherry and mulberry as well

The sauces (please click links for more detail and transcription):
Black grape sauce
I was making a small amount (plenty for two), oz in weight
-I took 4oz of grapes and half of much in bread (weight), smashed them together in a mortar with a little verjuice (I make my own but only have apple verjuice in the freezer so it is what I used here). I played around to see what happens if you don't mash it with the bread, all I can say is don't skip that, it will make it harder to incorporate if it is only added while straining. (what can I say, was curious)
-Once strained into the saucepan, boil with cinnamon and ginger and other good spices... I used my favourite powder douce to taste.
-Since the amount was so small, it did not take long to thicken and with the amounts I used, it thickened quite nicely! Use a smaller ratio of bread if you do not wasn't a sauce that is able to "stand".

Slavic Cooking Sauce
The way we made it... oh wow, this had some kick!
I really didn't measure hard when making it, but used about a small handful of walnuts, pounded in my freshly washed and still wet mortar, 2 cloves garlic chopped and smushed in there as well (with the nuts), small handful (and I don't have very large hands) of some dried white bread (I save this from old dried out loaves I made) soaked in chicken broth. I save broth reduced from the water I boil whole chickens in, this is then frozen in cubes and baggied... for this I used two cubes with a little bit of boiling water. I then mushed all this together but did not add more broth since I added more than I needed to mush the bread.
Now, to make it peacock blue it said I could use either black grape or cherry juice... tried a little grape but it was looking like I would need more grapes than I wished to spare so went with cherry juice which kept making it go more and more purple. As you can tell from the picture, I did stop before achieving full colour but it certainly would not have been any shade of blue.

Must Sauce
I ended up using the later mulberry version, only one problem, I had not a single fresh mulberry. What I did have was a simple syrup made from mulberries and dried mulberries.
For one sauce I experimented with 2oz syrup (mostly juice rather than sugar) with 2oz dried fruit and 1/2tsp cinnamon to 1/4tsp ginger. The other had the same spice but was only from the syrup. No sugar was added due to the sugar already present in the syrup.
The one with the fruit was strained, the other did not need straining (all that hard work being previously done). Interestingly, dried mulberry fruit does not really have the strong tannin flavour like some other dried fruit and the sauce with them ended up tasting more like I had used fresh fruit than the other with lacked a bit of character.

Sauces: (we used chicken to taste them with) 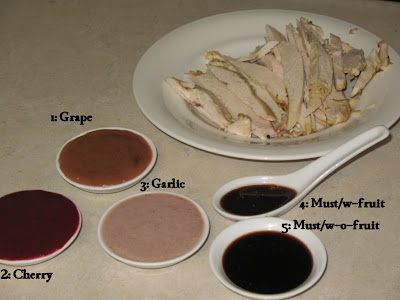 And the verdict:
We actually liked them all, though, because I took it easy on the sugar with the cherry (I actually like sour, and it is to taste), the boy was not as fond. I also took it easy with the verjuice in the grape (by contrast) which made it a little more sweet than the cherry and the boy just LOVED it. If he is any example to go by, I suggest tweaking the sugar/verjuice to ensure the sauces are a little more sweet than sour.
The garlic sauce was surprisingly full of punch. I could not taste anything walnut in it, nor feel anything unusual for a thickened sauce, but it is not to say something would not be missing without them. Because this was an uncooked sauce, the garlic has a sneaky quick bite. This would probably be really nice with cooked/roasted garlic but then it would be something different.
The must sauce was my favourite of the bunch. It wasn't bread thickened which does not make for very good dipping, but in practice any of these sauces would be served on/under ones food and this one can even be used as a cooking sauce (as per it's name). The flavour was decidingly fruity but the spices gave it a nice warm sensations. 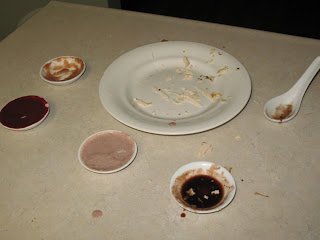