Lately I have been revisiting paintings with parsnips, and/or possibly carrots or other white roots, left on tables set for eating. What struck me was that the vegetables seemed purposely placed there apart from the partaking of food. What gave me cause to believe this was the fact the food was seemingly fresh from the garden or market, as in raw and unpeeled yet sitting on the table among other food items and not much of what I have read about parsnips, or carrots, lead me to believe that eating them in this manner was common at all. So, I did what any curious person would do, I dug around a little to see what there was to be said about parsnips and similar roots.

On my path to enlightenment what I found was loads of sexual content, at least once done weeding a lot of the wheat from the chaff. "Society and religion in Elizabethan England" (Greaves), gave me my first hint with a reference to both parsnips and wild carrots increasing a man's sexual desires. Of course the next obvious place to look was herbal/medical texts. In 1563 Culpeper states: "The garden Parsnip nourishes much, and is good and wholesome nournishment,but a little windy, whereby it is thought to procure bodily lust" which is pretty close to similar quotes I found on the net. Of course there are many earlier references, such as in the widely known "Tacuinum Sanitatis" of the 14th century where it attributes the stimulation of sexual intercourse to the Pastinace, a word sometimes used to describe both carrot and parsnip. An other reference I found from the materia medica (the Taylor-Schechter Genizah collection) dating to 11th to 14th century Cairo, depicted the parsnip as an aphrodisiac. What is amusing, as pointed out in much of the above references, is that it was also a wind producing food (it was said to make you fart), this apparently was connected to the excitement (blood flow) of certain areas.

Of course, there is more here at play than just medicinal qualities, it also had a phallic property which pops up in Florio's Italian/English dictionary, 1598, (cited in the OED) as the "pastinaca muranese", "a dildoe of glasse" ... or at least this is what I was able to gather from various sources. This is also brought to light in "Picturing women in late Medieval and Renaissance art" (Grössinger) where she describes parsnips and cabbages representative of male and female genitalia, and given much of what I have read today, am inclined to agree.

I am not entirely sure how a painting of the last supper (dated 1546) fits into the theme however, being one of a few table settings I found with the presumably symbolic parsnips. Nor am I sure why some regular fellas at a table (1620) would require parsnip symbolism. Did people actually keep raw parsnips/carrots at the table after all? 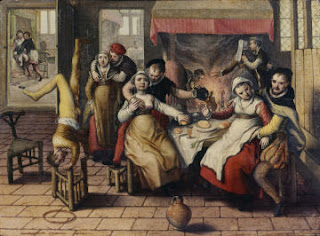 But then we have this highly suggestive painting with a, possibly equally suggestive, root veggy that certainly fits the scene! 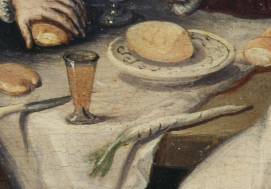 close up of offending root

These two other examples may also possibly be making the same sort of suggestion... 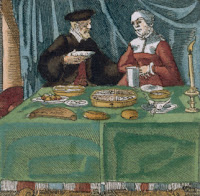 while the picture at the top and below are Dutch, this one appears to be taking the theme to Germany 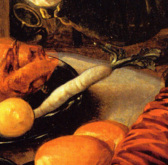