When is food not food?

It's hard to judge if there ever was a time in history when man considered potential food not to be food, or should I say recorded history since there have been evidence of human gnawing on domestic animals going back as far as early man (and I'm talking about our present species so will stop there).

It's just something food related that I was forced to ponder as a friend had become vocally upset and eating jokes in relation to their pets. As horrible as it sounds to joke about eating someone's pet, to at least a portion of the population out there, it is an instinctive reaction to dehumanize any pet traditionally seen as livestock. In this case we make jokes and name our pets things like Lambchops or Bacon. It isn't meant in disrespect to the animal, in many cases, these animals are maintained quite comfortably and can generally lead very nice lives. On  the end of the livestock pet, sometimes we give them personable names but joke aside from that, again a reminder of the true function of the pet... livestock.

Unfortunately, sometimes people choose lifetime pets that other cultures consider livestock or simply food and even though they know they are only intended as pets, it becomes to easy to forget that we might be doing the same as suggesting fluffy the cat should be fricasseed... I suspect that doesn't always go so well.

Being a little socially inept, it certainly isn't something I think about and am sure I've talked about yummy curried goat to people who only see them as great pets, not food...

and then this picture popped into my mind (which I posted on flicker some time ago, now lets hope I can find it again): 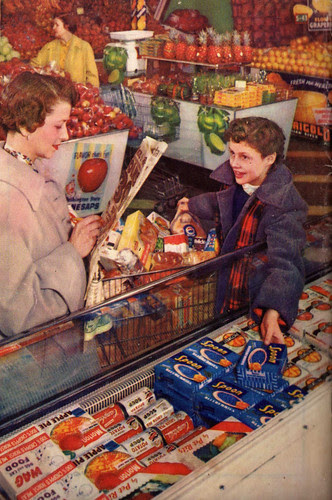 mom and daughter happily shopping... then look at the dog food on the far left, I bet they wouldn't even have batted an eye, maybe not people food but still food and something we might just protest today
Posted by Unknown at 6:05 PM