A little bit of Rumpolt 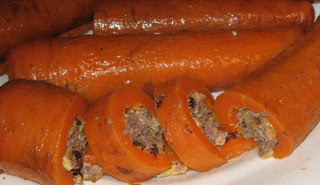 Took a dive into Rumpolt the other day but never posted pictures, not even on the website yet

Yes, the carrots are orange, it's what I had and are suitably period enough, lets just say I can make it work.
But, the real reason why I used them is because they were just really big and thought, hey... I can likely stuff these! 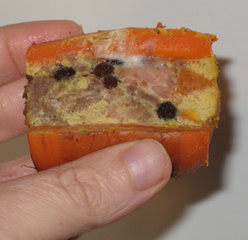 See! Apparently they are supposed to be yellow inside... kinda hard to do with meat and currents.

These are fine on their own but begged for a starch... Rice cooked in Beef Broth went really well with this. I think it would look really pretty served up on top of the rice, if at least for personal dining.

Tried another dish with the carrot I scooped out as to not waste. Same book... basically chopped roots seasoned with scalded milk... it is okay enough but not very exciting (not that I expected it to be)
Posted by Unknown at 10:26 PM