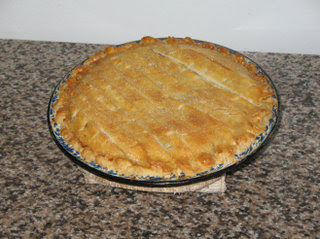 
Today amattempting a crostata... with 16th century instruction... this is in no way seems to compare to what we would consider a traditional or old fashioned crostata, seems far fancier and more modern... go figure!

Doing an Apple and Cheese Crostata ...back... fresh out of the oven My take on this based on the instructions given for the pastry from about 3 different recipes since the Apple Crostata recipe was rather vague on the set up of the paste.

The bottom is built up from a thicker layer of paste (being the flour/butter/cold water/egg type), buttered and layered with thinner layers (this is laid in the pie pan and the edge is twisted paste), over this the provatura, then the apples

prepared thus: thinly sliced raw, or as I did... baked/cooked apples... done with butter and white wine or madeira (I used sherry) and sugar.

Over the apples, sprinkle of cinnamon and sugar, then the provatura. Also, with this, is supposed to be dotted with butter and the additions of raisins, while I was not skimpy with the butter, I did forget the raisins... woops! :-O

What I wasn't sure is if it were covered and if covered, by what sort of layering. It could have been a solid layer with strips over top or a solid cut to look like strips and so on... I chose to layer strips on this one, making alternate slits in them... looks kind of cool but it was no more than guess work at that point.

Can't say how it tastes, though the individual parts tasted quite well as it was being made Still waiting for it to cool down and likely won't dive in until after supper.

If there is to be made more in the future, I'd likely give it a whirl without a top shell of pastry and just go with what the top layer of cheese gives.
Posted by Unknown at 11:09 PM