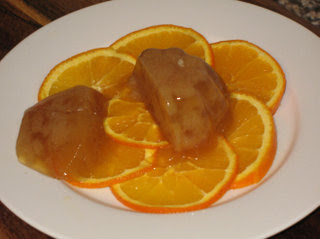 Yesterday, I made an aspic in miniature... basically just playing with the broth that came from dinner (pork roast) cooked the night before. If I were going to seriously go about it, I would likely boil down stuff on the bone with a nice bit of cartilage... like... ohhh calves feet :P I did encourage it will a wee bit of isinglass though.

As you can see, it is pretty small and I only put the liquid through a fine sieve but didn't bother with a cloth. I took this picture to show how firm it is as it has been cut through, it is still sitting on the same plate (after tasting of course... wasn't bad btw) and it has not changed in shape a bit at room temp. over 24hrs.

Even if nobody ate them, they would make for a pretty cheap table ornament, though in that very case, would stick to using feet and scrap (better than that sounded) than using good broth that would better be appreciated in soup.
Posted by Unknown at 11:14 PM