A wee board for a vigil..


Just this weekend I had two honors, one was getting to go to Endeweard's first Baronial Investiture and the other was getting to make a small board for D'Unstable's Laurel vigil. Now to set the scene a bit more clearly, I am still not yet moved into a home of my own and we are presently staying with friends while my husband is away for a week at a time so this end of things have been interesting...BUT between that and having to work out the food between two countries, relying on dear old friends and one very new one, and a few minor glitches where food got scattered and didn't quite make it to site or had to be removed from the list, we made it happen.

In the end, this is what ended up on board: 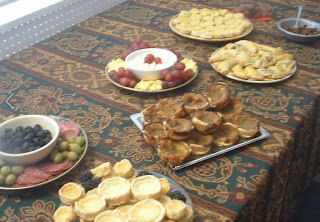 This is the vigil board, well a larger portion of it. I might note though, that the item right down center front are butter tarts made by popular request by (looking this up so I can spell this correctly) Mistress Bess Darnley, and while they may be a period food, they are not an SCA period food so I shall consider them some possibly odd new English dish due to the huge masses of sugar in them (in reality, they are a Canadian thing).


What was missing from the board (yes, am telling you what was left from it) were Dainty Pottages for Oyster, Snail (because I like to toss in something really different) and Mushroom, these are supposed to be served on toasts. Some cheese (including some of Mistress Bess's feta and a round of Brie *sigh*) got left behind and also missing were Lombard tarts and due to not being able to retrieve my casings... period sausage which I made before and are really good and was very sad not to be able to provide. 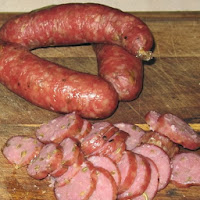 To make these, take 1 tsp salt, a few grinds of really chunky pepper and enough fennel to be really visible when mixed in. (fennel optional and for fresh sausage) This is a Good Bolognese sausage (15th century).

of course what makes them really good is hanging them in a nice smoke though because I stuck to the recipe and did not add any cure, just salt, I would not have tried to keep them for too long.

Now... should I ever get set back up with a smoker and all my stuff, this can happen again and I would love to make more!

Well...
Closest in the picture are Royal White Tarts
The pastry I chose to make for most of them was rather short, meaning I used more rather than less butter, and thus they were flakier than most period pastry but being a later period recipe and coming from Scappi (1570's), it wasn't wrong to do so... and also considering their size since I purposefully chose not to make full sized tarts.
For this, I considerably shrunk the size of the recipe but this is the original:
2lbs fresh provatura (I used provolone)
2lbs sugar
3 oz rosewater
3 cream tops (3 small cups)
15 fresh egg whites
About the only variation I made was in dropping the sugar a bit but without dropping the sweetness too much, this was in effort to allow D'Unstable to have at least a little.
What was particularly interesting to me with this particular tart is that it is noted as being a favourite of Pope Julius III... now apparently he lived a rather luxuriously so guessed his taste in food might be similar... and they were rather tasty.
Sadly... yes, there is a sad story, I did make up some without pastry but the sugars darkened too much to be presentable. I would try it again though, but with more time to dedicate to watching it while they bake. 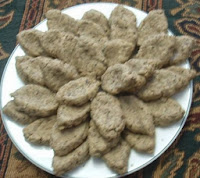 These are Bread of Walnuts!  (not seen in above picture)
The test piece I initially made was bigger but I quickly discovered that these could be easily rolled, cut and/or shaped. In this case I just broke the dough into somewhat equal portions and shaped them into leaves.

The original says to make the ground walnuts into a paste with herbs (for which I used very little in this case), grated suet (I only had cold butter but feel marrow would have been a more correct substitute as it gets suggested in various recipes of the period) and sweet and strong spices. For the spices, for which I used a good amount, was cinnamon, nutmeg and mace, cloves, pepper, grains and ginger.
Then we get to the questionable part. It says to take flour and make a sheet of it in the way of lasagna. This could be just to lay out flour flat, which I did but then I was to somehow put the past over this and make in the way of bread. I seriously thought about it and ended up adding an egg yolk as I would to many of my noodles or breads and also added a very little water (this is all heavily kneaded together until uniform). I'm not sure it would have worked out otherwise where these held together quite nicely, shaped easily and baked well. I baked these on parchment at regular baking temperature and watched the edges of the bottoms for turning darker and then took them out.

The pies I did up as crescent shaped on the far right were a mushroom cheese pastry I did from memory, I *think* they are from a Spanish source rather than Italian such as the rest of the board but did feel they would fit in well without being implausible, and I did try to keep in line with herbs/seasoning from Italian cookery. So... the filling for these were cooked/cut mushrooms, Parmesan cheese and various herbs mostly being parsley, mint and basil.

The little round tarts at the far back, were Garlic Tarts from "di cucina" (wish I had a more proper name to give you). With these you peel and boil the garlic then you soak them in cold water, pound them (I used a processor this time but would have used the mortar just because if I had it present) then add saffron, fresh cheese (I used a pressed curd/cottage cheese but believe I tossed in a little extra provolone as well) and beaten lard (I substituted butter which is a good substitute in this case), sweet and strong spices which were basically the same as above but with added long pepper. Temper with eggs and currants for which I kept out the currants to keep them as less sweet as possible for the recipient. As I write this, I can not remember if they were to be covered or not but decided that the built up ones would be open due to their size and somewhat delicate fillings.

Another "libro di cucina" recipe that his the board was "preserved nuts", though these ones were still a few days shy of being "sunned" but I rushed it along as best I could.
These ones were the pistachio nuts which I gathered were the Persian nuts the recipe called for. To prepare, soak the nuts to soften and then boil them until they are tender and then let dry. Of course this will also cause any skins to loosen, so I pushed all the skins off as well. To this, we add cloves, cinnamon and saffron and then boil this in honey until the pot is almost dry (I added enough honey to make sure the nuts were all covered and had something to cook in). Then boil in another honey (I just scooped out the heavily spiced honey and added some more) so that much of the honey is cooked. Then, put the pot in the sun for 15 says, noting to cover the pot so am guessing it is mainly for heat and not necessarily direct so I put them in a bowl and let them stay in the oven while I heated other things.
I would like to do these again, but not on a board unless I could get them somewhat dryer

Other items that ended up on the board were red and black grapes with green and black olives and some Genoa Salami, feta cheese and Gouda, because hey, my persona is Dutch and wanted it as a little "hi, this is from me for you"

and that was our food adventure for the end of the week.