I have been remembering to take pictures of various things I cooked up...
However I keep forgetting to write about them (and thus, not always remembering what the pictures are)
This time I remembered, more or less 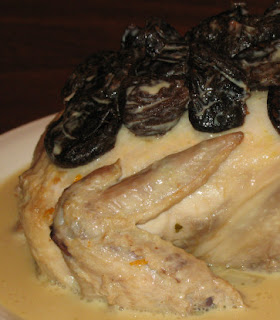 latest thing I done up was a chicken in white broth... interestingly, I would not call the broth "white" however... the sauce made from the broth could qualify as "white"
It is from an English recipe, late 16th century and I'm typing about this from memory so bare with me...
Basically it's a chicken boiled in a half/half mixture of verjuice and water with whole pepper, mace, handful of lettuce, dates and raisins... oh and a good sized lump of sugar, a stick of cinnamon and rind (zest) of an orange. This I did in the slow cooker because it fit a chicken better and it keeps it from getting all mangled looking (for those who boiled a hen before, you know what I'm saying)
Once cooked, I lifted it out from the liquid and then strained the liquid. (oh, I forgot... marrow bone boiled in the broth the chicken is cooked in, but this seems to be omit-able judging from other recipes) ...and the liquid was less verjuice as my sour was quite so and it states only half and half if it isn't too sour.
The recipe does not ask us to strain the liquid, however since it calls for whole pepper, whole mace and a stick of cinnamon, reason stands to suggest this be done. That, and we are working towards something white.
The liquid itself... was quite delicate with each flavour working together quite well though I did pick up some weak overtones of orange
This was strained into a saucepan and to it I added 2 egg yolks for thickening... this is what whitens the sauce! However it didn't seem like it would thicken much at all so went with the 3 (it said 2-3) and got it up to a boil but it only thickened very slightly... I did not risk boiling too long as anyone knows, a yolk thickener will curdle. Either this is to be only slightly thickened or I used too much broth (maybe I went a bit over two cups)... on the other hand "white broth"...
Over the chicken, I had Shannon place some previously boiled prunes... these are to be boiled separate and placed on the chicken, over this was poured the sauce...
All I can say, is that it went over quite well... though again, it is quite delicate. If one were to serve this at a feast, I would avoid serving it against any strongly flavoured dishes... though, this is a dish also meant to be served early in the feast and here it does well!

As I could not make it to weekly tavern, this dish was enjoyed at home to which the boy described it as "Yum"

On serving, taking in account of practicality of serving several with a small staff and kitchen, I'd suggest a whole bird for head table and broken down flesh plattered for the rest. Would be nice, for most, served over lemons as garnish... though I'd be temped to use an orange as this isn't chicken in lemon.
Posted by Unknown at 7:54 PM