Food play in the SCA

For those who don't know, I have been playing in the SCA for over a decade, mostly within the very North-Eastern parts of the East Kingdom (in the provinces of Nova Scotia and New Brunswick). In a historic food context, the SCA is a great place to practice one's art as it's time period expands a fairly large chunk of time until about 1600 and covers all countries known to pre-16th century Europeans excluding the Americas.

The most common way to experience food within the SCA context is through their "feasts", these usually being late meals held by candlelight in an effort to block out their modern surroundings and bring some magic to the experience. While one might not always gain a complete authentic experience with SCA cooking or dining, they are sure to take with them some snippets of the past.

One thing to be aware of, is that the SCA promotes learning through doing and this means ALL levels of authenticity is to be expected with feasts and feasting.  Generally speaking, if you can produce well tasting food that is not blatantly modern, you will be accepted and no-doubt, asked to do it again! and again!

In some groups, such as where I played, they also serve out mid-day meals via sideboards where food is spread out where people can generally help themselves to what is there. Due to the nature of this type of service, this meal is usually included in the cost of attending the event itself. (feasts are usually a separate cost) 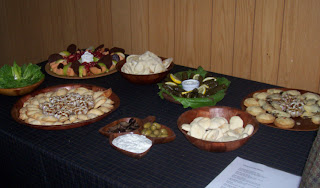 Typical dayboard service
The above picture was a dayboard I put on for an event a few years back that doesn't have a feast served. It consisted mostly of finger foods, such as small mushroom and cheese pastries, salmon pastries, home-made cheeses and sauces, dolmas, fruit and fruit pastes, olives, breads (small pitas), roasted garlic and the like. Though it doesn't seem like much, it was constantly replenished from the kitchen.

This is a great way for an inexperienced cook to jump into the realm of food service within the SCA if they are weary of doing feasts but still want to create a meal from conception to service. It's also not a bad way to introduce a group to your food and to the preparation and service of meals/feasts if they are not yet accustomed.
Posted by Unknown at 10:18 AM